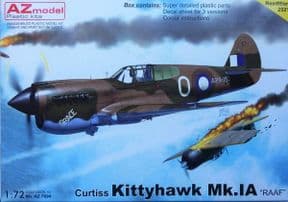 The P-40 was America's best and most modern fighter early in WW2. There was many variants of the P-40 and it was supplied to many different air forces. In the USAAF it was eventually largely replaced by the likes of the P-38, P-47 and P-51. The Kittyhawk was the RAF's name for the P-40 Warhawk models, with the Mk Ia being the equivalent of the P-40E Warhawk. Although inferior to a Spitfire it overall performance, the RAF found the Kittyhawk to be an able fighter and fighter bomber at lower altitudes and it became well known for it's role in the North African Theatre.

This is AZ Model's P-40E (Kittyhawk/Warhawk). It is highly detailed with engraved panel lines and comes with markings for 3 different aircraft, all in RAAF markings. This is probably the 2nd best P-40E kit after the Special Hobby kit but it's very keenly priced!