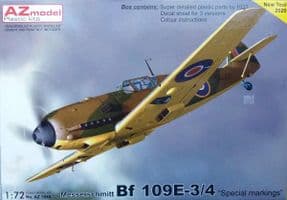 This is AZ Model's excellent new tool Bf109E kit which looks as good as their earlier excellent 109F/G series of kits. It is highly detailed with engraved panel lines and comes with decals for a 'test Bf109E-4' flown by Werner Molders and an E-3/b from JG 51 in both Luftwaffe markings and RAF markings (2 camouflage options for this one) following its capture