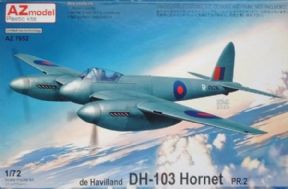 The de Havilland Hornet was developed from the Mosquito and was designed to be a long range fighter for the WW2 Pacific theatre. WW2 ended before the Hornet could enter service. The Hornet was one of the fastest piston engine fighters, achieving speeds of around 475mph. It could operate as a fighter or fighter bomber and there was a photo reconnaissance version, as well as the naval Sea Hornet. The Hornet saw limited post war use before being replaced by Jet Fighters.

This is AZ Model's new dH Hornet kit. It's injection moulded plastic but in the 'short run style' so will require a lot more skill and work than a regular plastic kit. There are decal options for 3 different RAF aircraft.