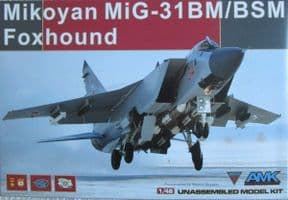 OUT OF STOCK
WAS: £42.99
OUR PRICE:£37.32
Sorry, this item is out of stock.
If you would like to order it, please email us with the product details above this message and the number you want. We will get back to you with a current price, shipping cost and likely delivery date.
Please also let us know if you´re outside the UK so we use the correct postage rates.

The MiG-31 is the replacement for the MiG-25 from which it was developed. It entered service in 1981 and is expected to remain in service until 2030. It has a powerful radar and is armed with a 23mm cannon and up to 8 air to air missiles. It also features an exceptional top speed (like the MiG-25) of around Mach 2.8 or over 1800mph. It has the capability to intercept small targets, such as cruise missiles as well as conventional aircraft at long or short ranges. In short it is a highly effective interceptor aircraft.

Avant Garde are a new manufacturer based in China. They're kits look to be of high quality and the MiG-31 already has very positive reviews. It comes with decals for 3 different Russian aircraft and a small fret of etch metal parts.
Write an online review and share your thoughts with other shoppers!