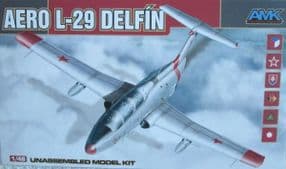 OUT OF STOCK
WAS: £25.99
OUR PRICE:£22.98
Sorry, this item is out of stock.
If you would like to order it, please email us with the product details above this message and the number you want. We will get back to you with a current price, shipping cost and likely delivery date.
Please also let us know if you´re outside the UK so we use the correct postage rates.

The Aero L-29 Delfin was a 2 seat training aircraft that could also double as a weapons trainer/light attack aircraft. It first entered service in 1961 and became the standard jet trainer for Warsaw Pact Air Forces and was the first Czech designed and built jet aircraft. It is an easy aircraft to fly and maintain and can operate from normal runways or grass fields and has an excellent safety record. It was in production from 1963 to 1974 with around 3600 being made and whilst most military operators have retired the aircraft from service, a handful of Air Forces still operate it in small numbers. There are also a number of L-29's that are privately owned including a few that take part in air races.

Avant Garde are a new manufacturer based in China. Their kits look to be high quality with their MiG-31 getting many positive views. This kit also looks very good and comes with a small fret of etch metal parts and 7 decal options for Russian, Czech, Slovak, East German, Iraq and Indonesia
Write an online review and share your thoughts with other shoppers!