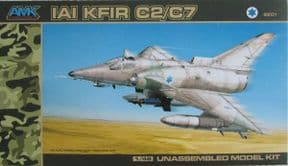 OUT OF STOCK
WAS: £32.99
OUR PRICE:£28.98
Sorry, this item is out of stock.
If you would like to order it, please email us with the product details above this message and the number you want. We will get back to you with a current price, shipping cost and likely delivery date.
Please also let us know if you´re outside the UK so we use the correct postage rates.

The IAI Kfir is an Israeli built jet fighter based on the Mirage 5 air frame. It was fitted with an American J79 engine (same as in the Phantom) and Israeli avionics. It was a multi-role fighter, being used briefly as the IAF's main air to air fighter but it was quickly replaced in that role by the F-15 Eagle. The Kfir was from then on used as a strike aircraft and in the early 1980's the C2's were upgraded to the more capable C7.

The Kfir's were withdrawn in the 1990's after 20 years of continuous service and many successful bombing missions behind it. It has also been used by the USAF as an aggressor aircraft and as front line aircraft by the Air Forces of Colombia, Ecuador and Sri Lanka.

AMK are from Macau and are relatively new. Their kits are highly detailed, using engraved panel lines and are known for having plenty of choice for ordnance on the models and are highly regarded in the modelling community. There are markings for 2 different Aircraft from Israel..
Write an online review and share your thoughts with other shoppers!