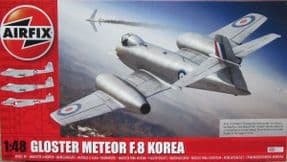 OUT OF STOCK
WAS: £36.99
OUR PRICE:£31.98
Sorry, this item is out of stock.
If you would like to order it, please email us with the product details above this message and the number you want. We will get back to you with a current price, shipping cost and likely delivery date.
Please also let us know if you´re outside the UK so we use the correct postage rates.

The Gloster Meteor was the first jet in service with the RAF, with the Mk 1 and 3 entering service during WW2. The improved Mk 8 with more powerful engines entered service in 1949.

It was used in Korea by the RAAF but was found to be inferior to the MiG 15. Despite this the Meteor was still a useful aircraft both in the fighter role and fighter bomber role. The Israeli air force was another famous user of the Meteor, which they used in conjunction with the Dassault Ouragan.


This is a detailed plastic model kit and contains decals for 2 different RAAF aircraft used in the Korean war and a Dutch Meteor.
Write an online review and share your thoughts with other shoppers!