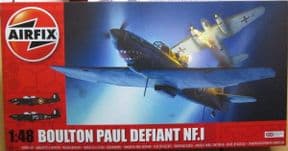 OUT OF STOCK
WAS: £20.99
OUR PRICE:£18.96
Sorry, this item is out of stock.
If you would like to order it, please email us with the product details above this message and the number you want. We will get back to you with a current price, shipping cost and likely delivery date.
Please also let us know if you´re outside the UK so we use the correct postage rates.

The Defiant was the third RAF monoplane used in the Battle of Britain and was radically different to other fighters as it carried all its armament in a revolving turret. The idea was to free the pilot from aiming the guns so he could concentrate on flying.

Initial dogfights with German fighters were successful as the Germans mistook them for Hurricanes and attacked from behind. The Germans were surprised to find a hail of machine gun bullets flying back at them and suffered some losses. The Germans quickly learned that the Defiant had no forward firing armament and after that the faster more agile ME109’s made mincemeat of the Defiant.

The Defiant switched to night fighting at which it was better suited. The Defiant was phased out when bigger and better equipped planes such as the Beaufighter and Mosquito took over the night fighter role. Markings are provided for 2 RAF Defiants.
Write an online review and share your thoughts with other shoppers!