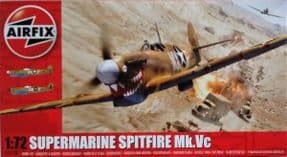 The Spitfire Mk V came about as a counter to the Messerschmitt Bf109F. Supermarine were developing the Spitfire Mk III around the Merlin 40 series engine, which produced 1475 Hp but the RAF needed an improved Spitfire straight away. Supermarine managed to fit the Merlin 40 in a Mk I/II airframe and it was successful. It became the Mk V and the plans for the Mk III were shelved as the Mk V could enter production almost straight away with out too much disruption to production lines. The first 100 or so were Mk Va's armed with eight machine guns but the main production models were the Mk Vb, which had two 20mm cannons and four machine guns and then the Mk Vc with a redesigned wing which could carry the same armament as a Mk Vb but with double the cannon ammunition or four 20mm cannons and provision to carry bombs.

This is a brand new tool kit from Airfix and looks really nice. It is well detailed with fine engraved panel lines and detailed interior. Decals are included for 2 aircraft, from the USAAF and SAAF.