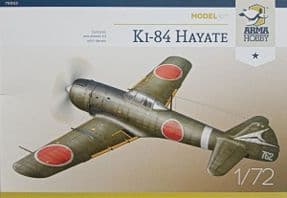 IN STOCK
WAS: £18.99
OUR PRICE:£16.20
The Nakajima Ki-84 Hayate was probably the best fighter fielded by the Japanese in WW2. It entered service in the summer of 1944 and proved to be a match for the best allied fighters, with good speed, climb, firepower and agility. Unlike many Japanese fighters it also possessed a reasonable level of protection for the pilot and fuel tanks. Although an excellent design it suffered from manufacturing defects due to poor materials, plus the lack of good quality fuel meant the pilots couldn't extract the maximum performance from the aircraft. On top of those issues, Japan was also running out of good pilots in general, so aircraft like the Ki-84 were unable to turn the tide.

Arma Hobby are a Polish company and this is their own Ki-84 kit. It contains plastic parts for one model, which looks very detailed and very crisply moulded. There are decals for 2 Japanese Army Aircraft.