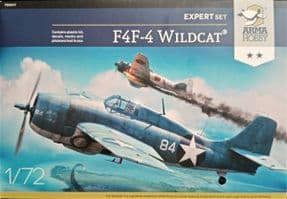 IN STOCK
WAS: £22.20
OUR PRICE:£18.90
The Grumman F4F Wildcat was the US Navy's main carrier fighter during the early part of the war in the Pacific. It was well armed, rugged and reasonably agile, and was able to take great punishment. Although outclassed in terms of speed, climb and agility by the Mitsubishi A6M Zero, Wildcat pilots were able to hold their own in combat thanks to tactics developed by the US Navy ace Commander 'Jimmy' Thatch. At the Battle of Midway in June 1942, the pilots used the 'Thatch Weave' successfully for the first time in combat. It then became the standard tactics used by the US Navy fighter pilots.

Wildcats were also used by the USMC from land bases, notably during the Guadalcanal campaign and also supplied to the Royal Navy, where it was initially known as the Martlet. The Wildcat was replaced by the larger Hellcat in 1943, as the US Navy's main fighter but the Wildcat continued to operate from Escort Carriers in the US and Royal Navy until the end of WW2.

Arma Hobby are a Polish company and this is their own F4F-4 Wildcat kit. This is the 'Expert' boxing and it is similar in concept to the Eduard Profipacks. It contains plastic parts for one model, which looks very detailed and very crisply moulded. Also included is a fret of unpainted etch metal detail parts, a canopy mask and decals for 5 Wildcats from the USN + USMC, as well as a Martlet II, from the Royal Navy, including Lt Cmdr Thach's Wildcat from Midway and both a US and RN Wildcat used in Op Torch.