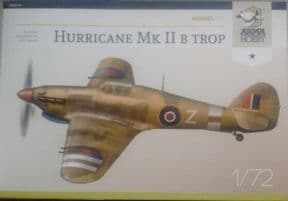 IN STOCK
WAS: £15.70
OUR PRICE:£13.38
The Hurricane was the next step in fighter development from high performance bi-planes, like the Hawker Fury. The Air Ministry wanted a high performance monoplane fighter with 8 machine guns and capable of 300mph. The Hurricane was the first of the new fighters, first flying in 1935, it was soon followed by the more famous Spitfire in 1936. The Spitfire was the superior aircraft but was difficult to manufacture, so the RAF ordered the Hurricane as it needed large numbers of modern fighters. The Spitfire was also ordered but took several years to get into service in numbers.

The early Hurricanes had a 2 bladed propeller and fabric covered wings but by the outbreak of WW2 they had 3 bladed constant speed propellers and metal skinned wings, allowing better overall performance and dive speeds. Although the Spitfire was the more advanced and faster of the RAF fighters during the Battle of Britain, the Hurricane was in service in much greater numbers and shot down around 60% of all enemy planes during the Battle. The more powerful Mk II Hurricane soon followed but by that time Spitfire production was up greatly and the Spitfire Mk II and V were still superior fighters than the Hurricane. The Hurricane Mk IIb was armed with 12 machine guns.


Arma Hobby are a Polish company and this is their own Hurricane Mk IIb kit. This is the basic boxing of the subject and it contains plastic parts for one model, which looks very detailed and very crisply moulded, with decals for two different RAF Hurricanes.