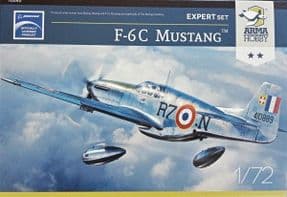 The P-51 was able to escort the US heavy bombers all the way to the furthest targets in Germany and back. It was because of this the Luftwaffe could no longer effectively defend Germany against bomber raids. Mustangs were also used to escort the B-29's over Japan in much the same way. After WW2 they saw use in the Korean War but they were relegated to the ground attack role as they were no match for the MiG-15 jet fighter. The F-6C was the reconnaissance variant of the P-51C, which was fitted with camera's in the rear fuselage.

Arma Hobby are a Polish company and this is their own F-51C kit. This is the 'Expert' boxing and it is similar in concept to the Eduard Profipacks. It contains plastic parts for one model, which looks very detailed and very crisply moulded. Also included is a fret of unpainted etch metal detail parts, a canopy mask and decals for 4 Mustangs of the USAAF and French Air Force.