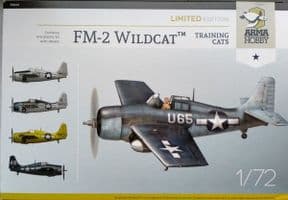 The Grumman F4F Wildcat was the US Navy's main carrier fighter during the early part of the war in the Pacific. It was well armed, rugged and reasonably agile, and was able to take great punishment. Although outclassed in terms of speed, climb and agility by the Mitsubishi A6M Zero, Wildcat pilots were able to hold their own in combat thanks to tactics developed by the US Navy ace Commander 'Jimmy' Thatch. At the Battle of Midway in June 1942, the pilots used the 'Thatch Weave' successfully for the first time in combat. It then became the standard tactics used by the US Navy fighter pilots.

Wildcat production by Grumman ended in 1943 but General Motors continued production with the improved FM-2. The FM-2 had a more powerful engine and a new larger tail to help cope with the new engine's extra torque. It was also lightened by removing 2 of the mg's and could carry drop tanks, bombs or rockets. The FM-2 was used on the smaller Escort Carriers with the larger and better Hellcat being used on the larger front line carriers. A notable battle for the FM-2 Wildcats, was Leyte Gulf, where a Japanese battleship group broke through and attacked a USN Escort Carrier force. The Escort Carrier's Wildcat and Avengers attack the Japanese ship frantically with whatever they could, even strafing the bridge of the giant battleship Yamato with their mg's. The ferocity of the American defence helped convince the Japanese admiral to retire from battle, thinking the US task force was far superior than it actually was.

Arma Hobby are a Polish company and this is their own FM-2 Wildcat kit. This is the 'Junior' boxing, which means it's a regular kit with plastic parts and decals with no extras. This box has decals for 5 US Navy Wildcats, from training squadrons
Write an online review and share your thoughts with other shoppers!