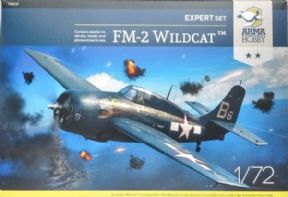 OUT OF STOCK
WAS: £22.20
OUR PRICE:£20.34
Sorry, this item is out of stock.
If you would like to order it, please email us with the product details above this message and the number you want. We will get back to you with a current price, shipping cost and likely delivery date.
Please also let us know if you´re outside the UK so we use the correct postage rates.

Arma Hobby are a Polish company and this is their own FM-2 Wildcat kit. This is the 'Expert' boxing and it is similar in concept to the Eduard Profipacks. It contains plastic parts for one model, which looks very detailed and very crisply moulded. Also included is a fret of unpainted etch metal detail parts, a canopy mask and decals for six Wildcats from the USN Pacific and Atlantic fleets, as well as one from the Royal Navy.